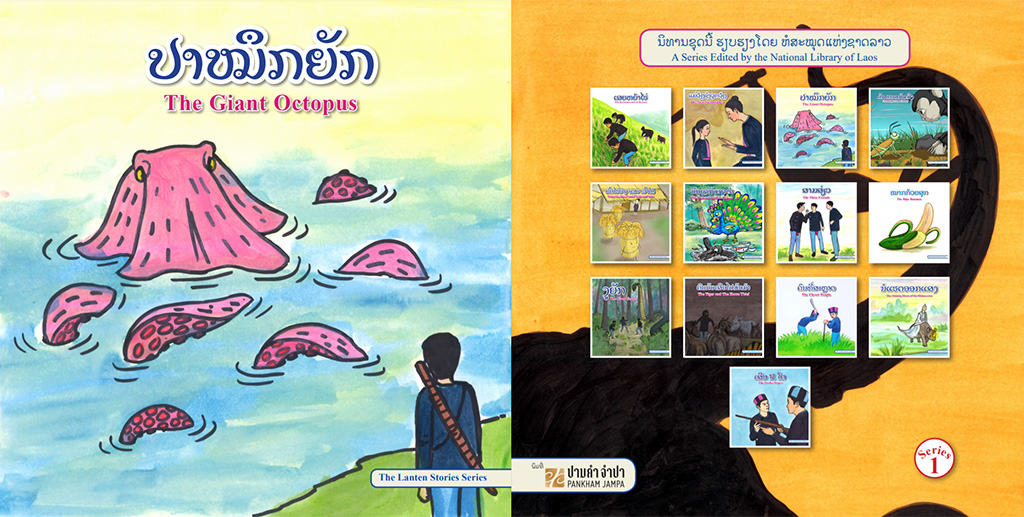 The Lanten oral stories constitute an invaluable asset of the Lanten cultural heritage. The Lanten stories cover a wide range of themes: from folk tales, moral lessons, and (hi)stories about the Lanten cultural origins both mythical (e.g., cosmogony ) and social (e.g., migrations) to aetiological myths that explain why things or habits are the way they are today.

In the past, the oral transmission of the stories was carried on from parents to children, masters to apprentices, and especially by storytellers invited to entertain major ceremonies. This oral transmission has been, however, interrupted in the last two decades due to different social changes taking place in the Lao PDR. The Lao-language schooling that provides all the Lanten children with primary and secondary education has Lao language as the official language of instruction; as a result, the children spend most of the time coping with their studies and have little time to hear about their own stories in Lanten (kim mun) language. Moreover, the role of the Lanten storytellers has diminished over the years: They used to entertain with their stories the attendants of large events such as weddings and funerals, but these events changed their format over time, favouring other performances such as singing and dancing at weddings and playing cards at funerals. A major social change was caused by the introduction of electricity, which arrived in most Laotian Lanten communities in the 2000s or the early 2010s. Before electricity, the nights enabled social gatherings around the fire after work, which facilitated the exchange and transmission of stories. Electricity enabled longer working days, and new technologies (i.e., television, smartphones, social media) have reshaped how the Lanten interact at night with each other and how they enjoy their free time. All these social changes have impacted on the transmission of the stories which by 2015 seemed ready to fade as the old storytellers aged and the transmission had been almost stopped.

The research on the Lanten society and cosmos uncovered the essential role of the oral stories in the Lanten ritual system, in which they play a fundamental role in providing the pillars for the internal narrative of a plethora of ritual actions. But these stories constitute a fundamental component part of the Lanten identity, which makes essential their preservation on behalf of future generations. In this regard, the role of the Brothers Grimm who together collected and published folktales in the 19th century has served as inspiration.

In August 2020, a first series of thirteen illustrated books for children, edited by Khanthamaly Yangnouvong (Director-General of the NLL) and Joseba Estevez (director of the project) was published in Laos.  The Ebooks are available online at the dedicated website: LantenStories.com 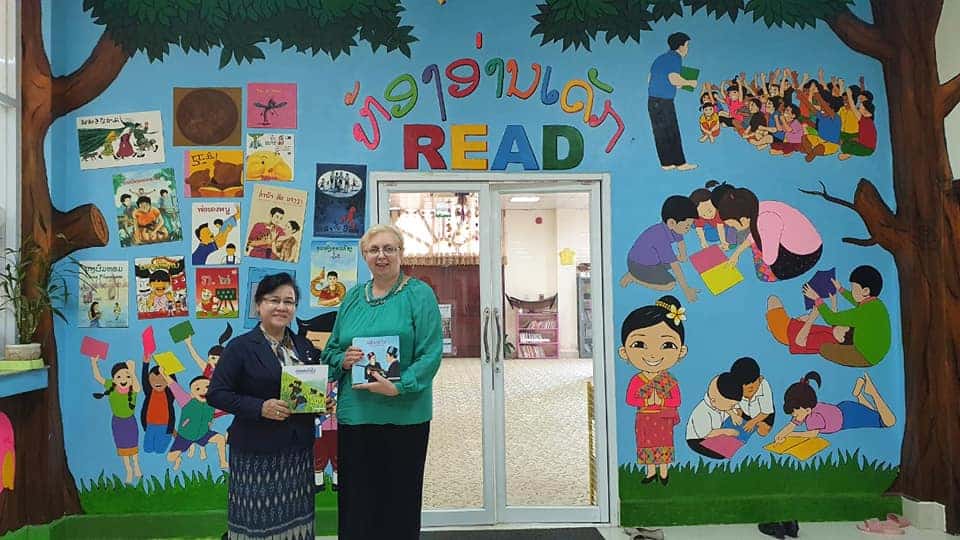 Ms. Khanthamaly Yangnouvong,  Director-General of the NLL, and H.E. Ms. Ina Marčiulionytė, Ambassador of the EU Delegation to Laos, with the two illustrated Lanten stories of the first series published in 2020.

Joseba Estevez started collecting stories in 2010 as part of his research on the Lanten society and cosmos. The endangered status of the oral stories required, nonetheless, a more urgent approach to record as many stories as possible before they were lost, and to facilitate their promotion and transmission.

For these reasons and within the consortium created by the University of Münster, the University of Hong Kong, and the National Library of Laos, a project to revitalise the Lanten Stories was launched. The project had two main goals: To preserve the stories and to promote literacy amongst the Lanten children and women.

The Lanten Stories Project was supported by the Basic Education Quality and Access in Lao PDR – BEQUAL within the framework of their Innovation Fund.

The Lanten Stories project ran from 2017 to 2020 led by the Lao Ministry of Education and Sports and the Lao Ministry of Information, Culture, and Tourism and supported financially by the European Union and Australian Aid. The project was co-directed in Laos by Joseba Estevez (Co-I) and the director-general of the NLL, Khanthamaly Yangnouvong (Co-I) and supervised by Helene Basu (PI), Institute of Ethnology, University of Münster (Germany).

Over a period of two years, the Yao Dao Project team in Laos collected  115 stories in vernacular Lanten (Kim Mun language) that were translated into Lao and English. These stories were classified by themes and the maturity of their contents, which resulted in 70 stories being approved for children.

Three teams of illustrators initiated the challenging transformation of some of these selected stories into illustrated books for children.

The Lanten lack an imagery of their own. Their Daoist paintings, employed in the rituals, were sold to collectors and tourists over two decades ago. The only illustrations available are those appearing in their Daoist manuscripts or coming from non-Lanten sources (e.g. television, school material, magazines). Hence, the team invited different artists, each with their own techniques and approaches in their repertoire, who were invited to provide the potential readers with as many styles and motifs as possible.

The main approach in terms of techniques was twofold: Traditional illustration carried out by Saotula Khounphomxay, a well-known and talented Lao artist and one of our collaborators at the National Library of Laos; and digital illustration, which was developed by various artists engaged at Clay House Studios, the personal project of Souliya Phoumivong,  animator, educator, and founder of the studios and also one of our collaborators in Laos. Indeed, a stop- motion short film animating one of the Lanten oral stories is in our wish-list agenda ~ 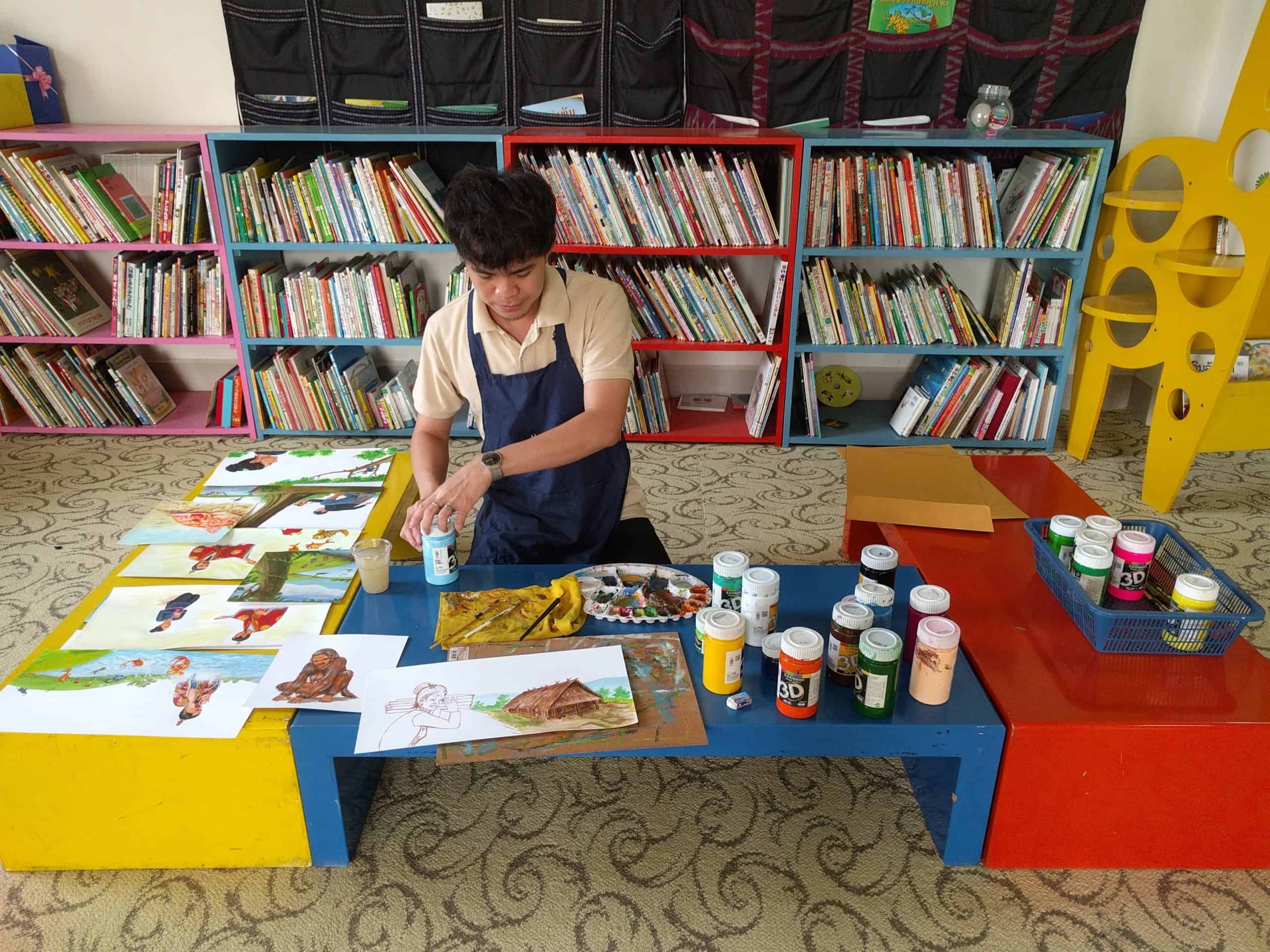 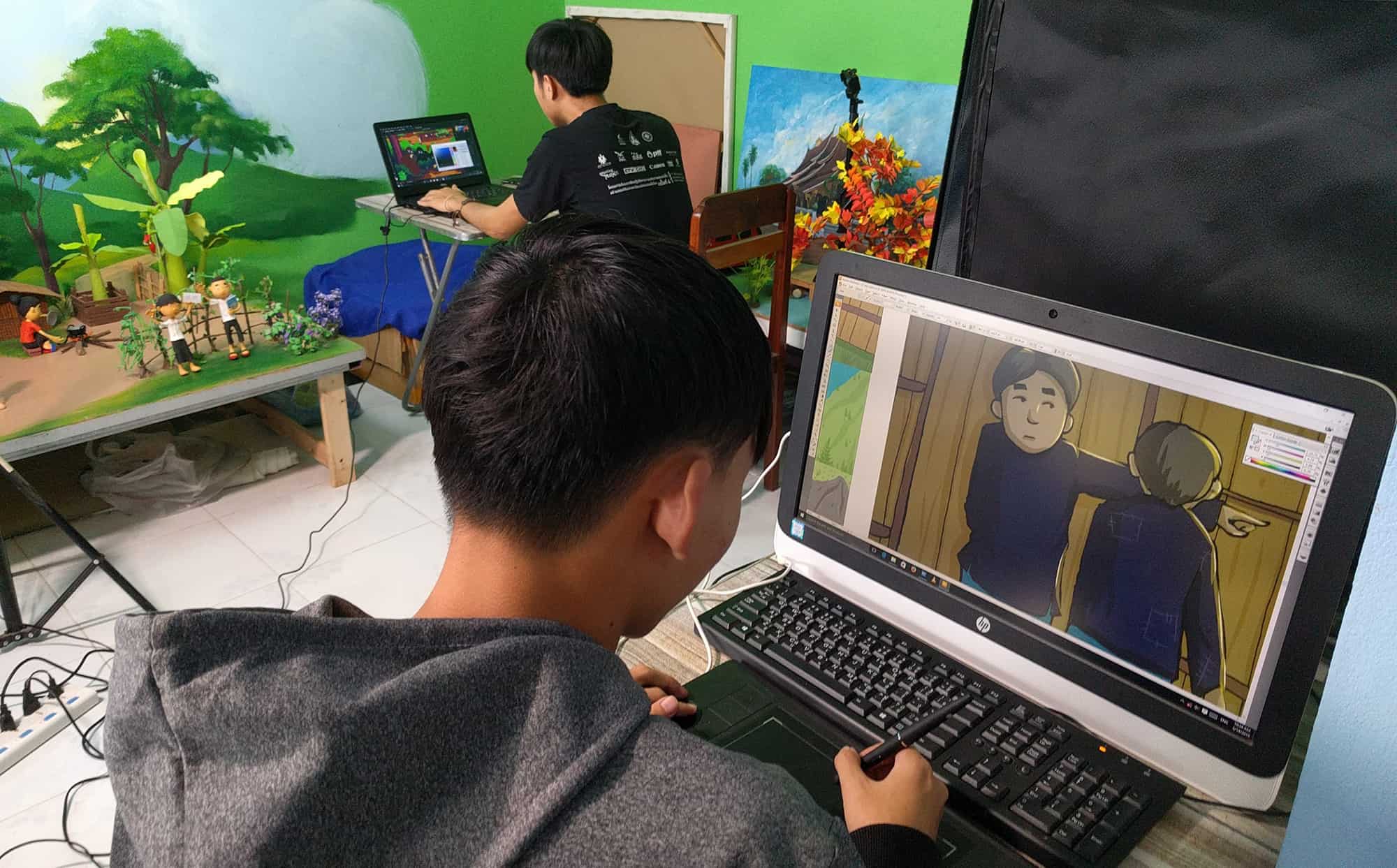 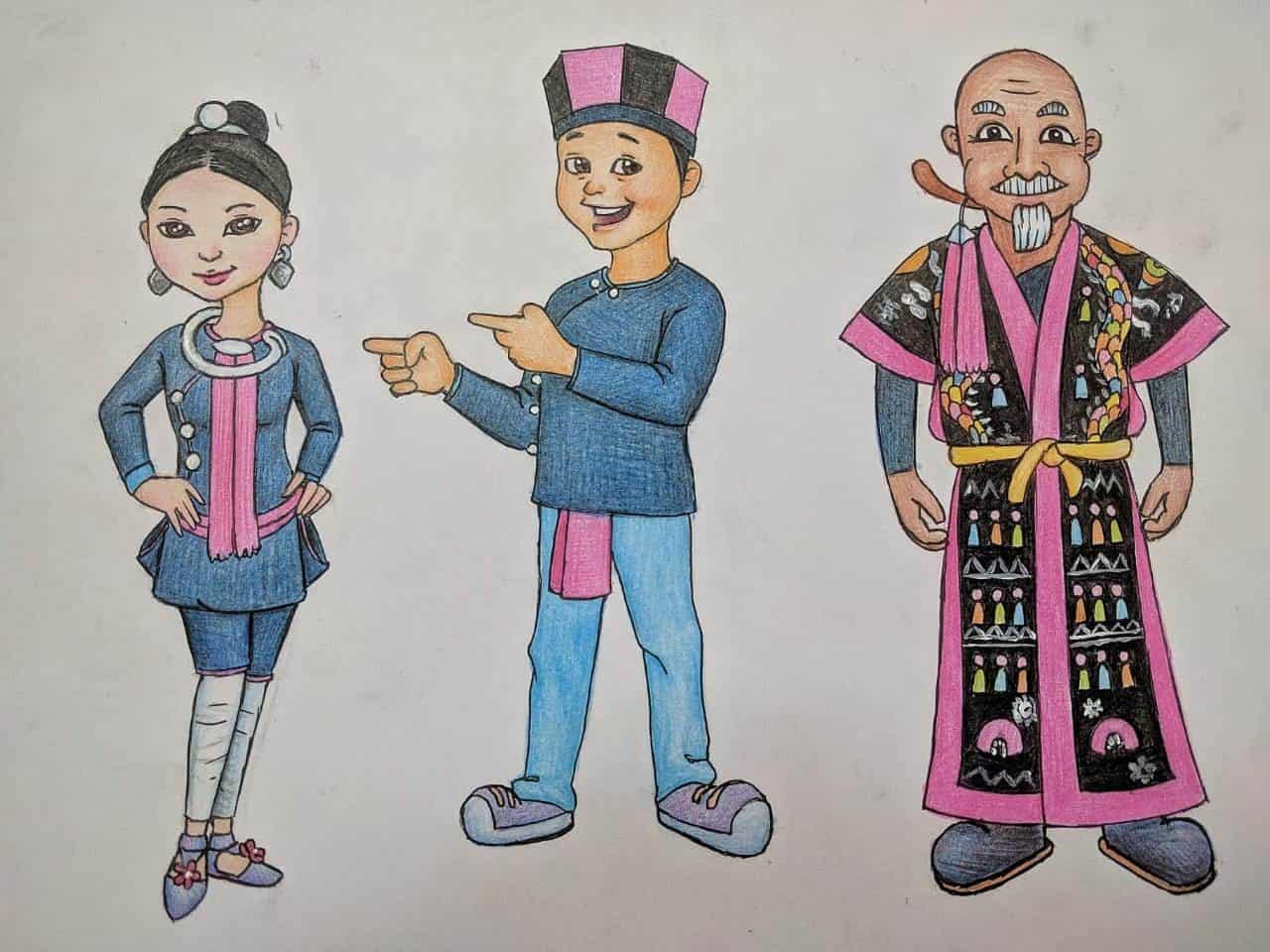 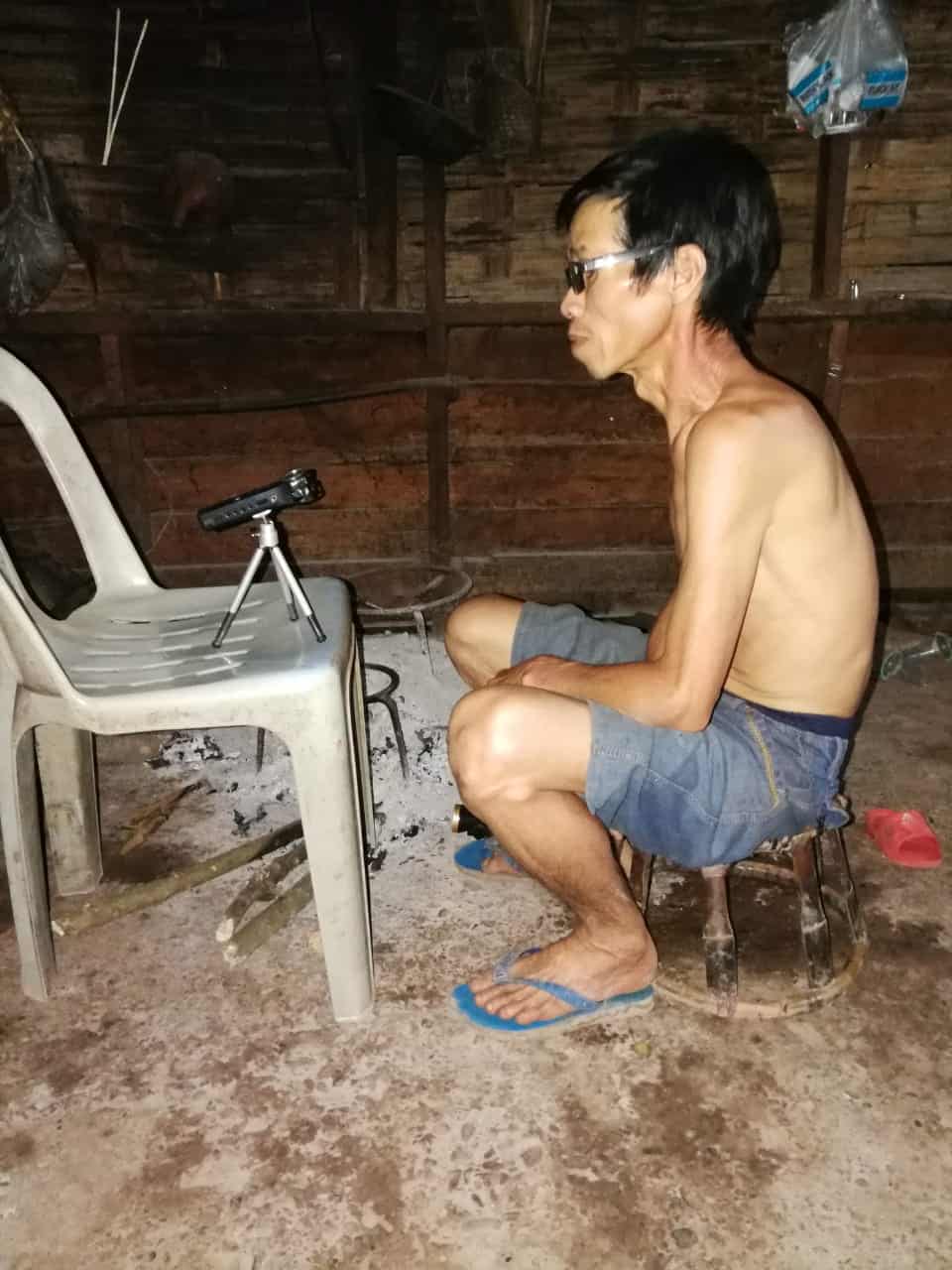 The Lanten Stories at HKU

The fundamental connection between the Lanten stories and the Lanten ritual system is one of the pillars of the research carried out by the Yao Dao Project team at HKU. However, our engagement with the Lanten community continues and we are planning to create more illustrated stories.

In 2020, a grant from the Knowledge Exchange (KE) Fund of the HKU (PI David Palmer, Co-Is Joseba estevez, Tom McDonald, Lu Xiaoxuan) enabled the project “A Digital Platform for the Trans-border Dissemination of the Lanten Yao Heritage (Laos/Vietnam/China)” aimed at the creation of new contents, further digitising the Lanten cultural heritage, and the creation of online archives and social media channels for disseminating the material produced as part of the past, present, and forthcoming projects.

The collaboration with the Lanten communities in Laos, China, and Vietnam is pivotal in this project, which uses digital heritage stewardship to engage the Lanten in the preservation and promotion of their material and intangible culture.

As part of this endeavour, a collaboration with the Common Core Office of HKU was initiated in December 2020 to widen the scope of the knowledge exchange, to engage both experts and students at HKU, and to produce more illustrated material.

The new project is exploring various artistic means to bring to life more Lanten stories such as illustrated books and comics, animation, and performance. In the first phase of the project, all these means will create digital platforms to enable their exchange amongst the Lanten communities through social media channels. Future phases include the transmission of the know-how to enable the Lanten communities to develop their own digital material and create their own stories. 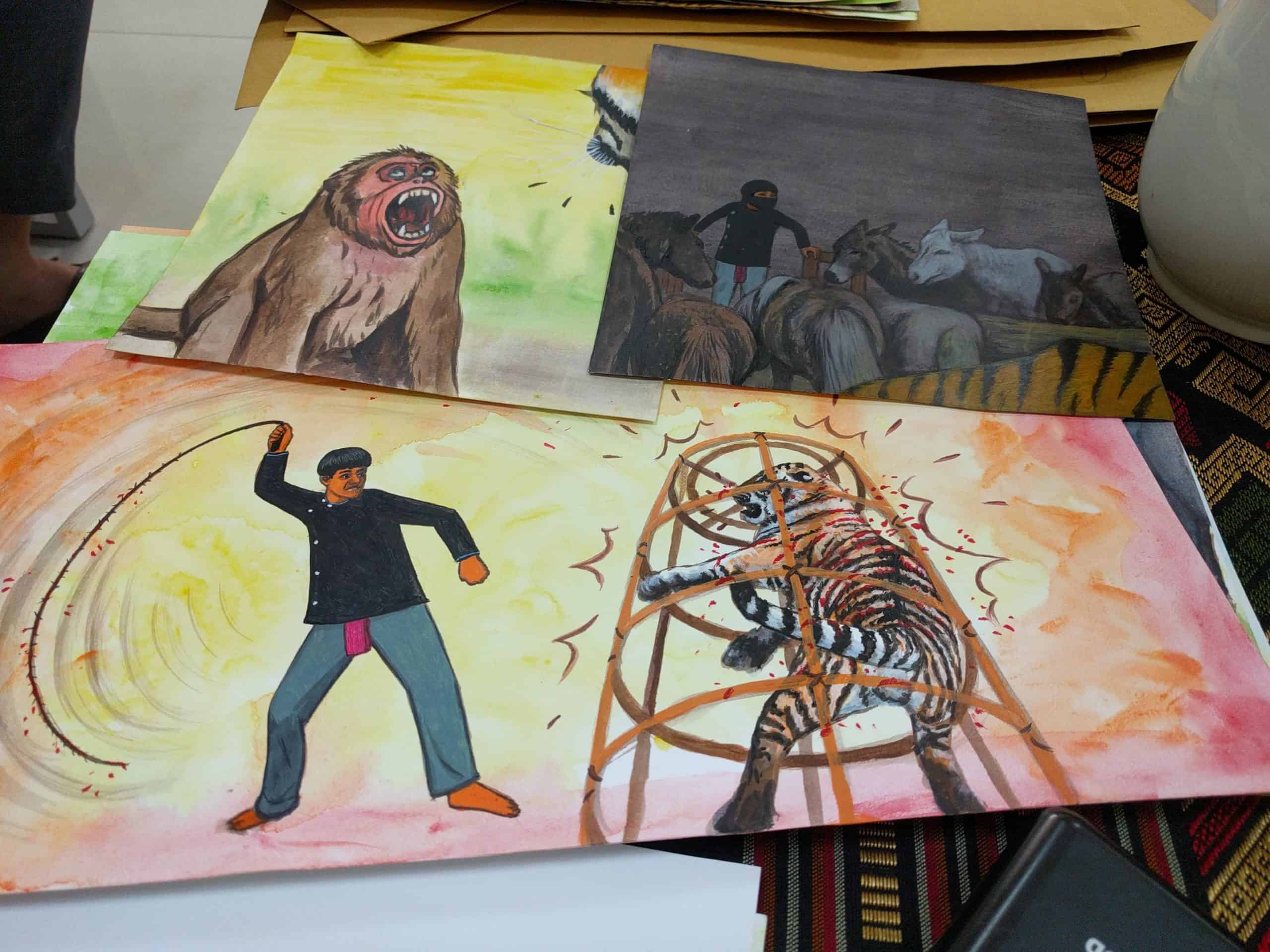